In 1949, layout designer Billi Bowen designed a large layout to be placed in the F.A.O. Schwarz store in New York City.

An article in Railroad Model Craftsman in April 2012, 1 tells us that Billi, or Bill, worked on the second of two indoor layouts at the 1939-1940 New York World's Fair.  The first of the indoor World's Fair layouts, "Railroads in Action," is fairly well known.  It was viewed in a theater setting that simulated a 24 hour period in the life of a typical railroad of that era.  The second layout called "Building the Railroad," which Bowen designed with H. Raymond Bishop of Outwaithe Exhibits, is less well known.  It was designed to be viewed close up and so is more detailed than the "Railroads in Action" exhibit.


The photo at the top of the page is from the Buckage Collection and depicts the 1949 layout built by A.C. Gilbert Co. for the F.A.O. Schwarz toy store in New York City.  It is dated as 1949 by the absence of rubber roadbed and diesel locomotives, both introduced in 1950.  Also both the layout and a display shelf contain 4904T sets with the 290 locomotive and 3 freight cars, which was introduced in 1949.

This layout is also definitely from F.A.O. Schwarz.  There is a small sign just above the log loader that reads "FAO Schwarz."  (See enlarged section below.)  The black lines were added in the process of preparing this photo for use as an illustration in the Model Railroad Handbook that came with the Pike Planning Kit. 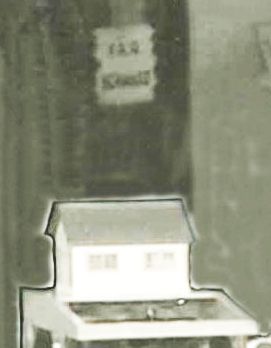 The track plan below is the original Billi Bowen plan for the F.A.O. Schwarz layout.

Comparing the layout plan above with the photo of the layout, it appears that the layout as built was a somewhat simplified version of the original Bowen design.  The passing sidings on the outer loop appear to have been eliminated, as have the connections between the loops.  In addition the inner sidings off of the over-under figure eight and the sidings from the outer loop at the lower left corner of the drawing have been simplified.  The layout on the Bowen drawing appears to require more space than that occupied by the 1949 layout in the photo.

This layout is clearly a masterpiece of layout design.  While the layout may not provide switching action that some model railroaders might desire, it serves the purpose for which it was designed perfectly.  It displays a reasonable number of trains in action and requires little supervision to run effectively.   Gilbert definitely got what they paid for here.   That is probably the reason that several incarnations of this track plan were used by Gilbert for different displays, such as the Jordan Marsh, Sibley, and Boys' Railroad Club.  There is currently increased interest in this layout design and several modern layouts utilizing much the same plan have been built, most of which pay homage to the Sibley Layout, which is probably the best known of these designs, but it all began here.

The following quote is from a “Model Railroading” published in 1956 by Trend Books Incorporated.   It describes the layout provided by A.C.Gilbert to FAO Schwarz.
(pages 17-19)

Additional photos of a 1953 F.A.O. Schwarz layout can be seen in the book Toy Train Memories at pages 89 and 93. 2 It is clear that while this layout is different from the 1949 version, it may have been built on the same framework and is located in the same room.  The photos below are provided by special arrangement with Kalmbach Publishing Co. 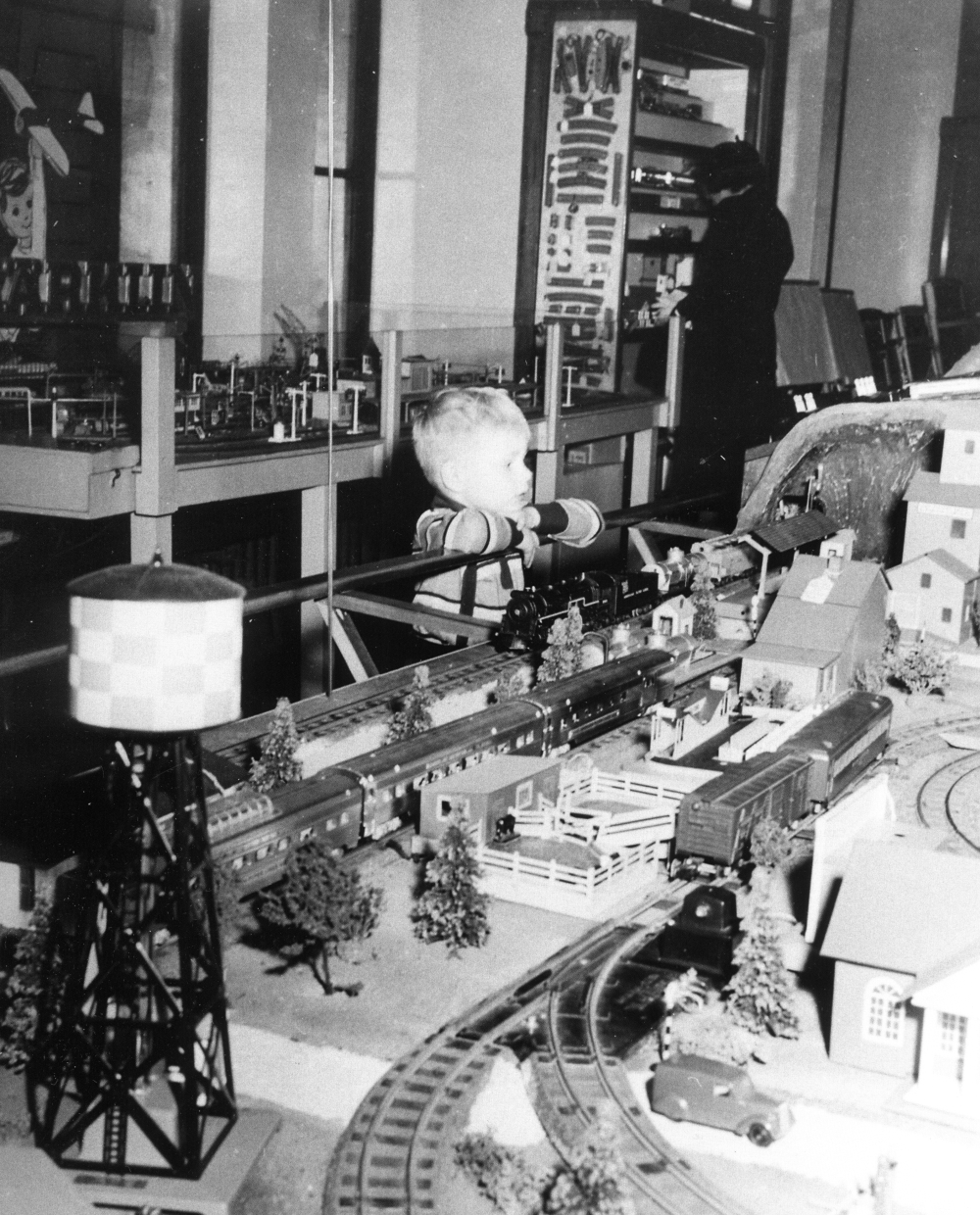 Photo of the 1953 Layout at F.A.O. Schwarz Toy Store
The room is recognizable as the same one that contained the 1949 display shown above. 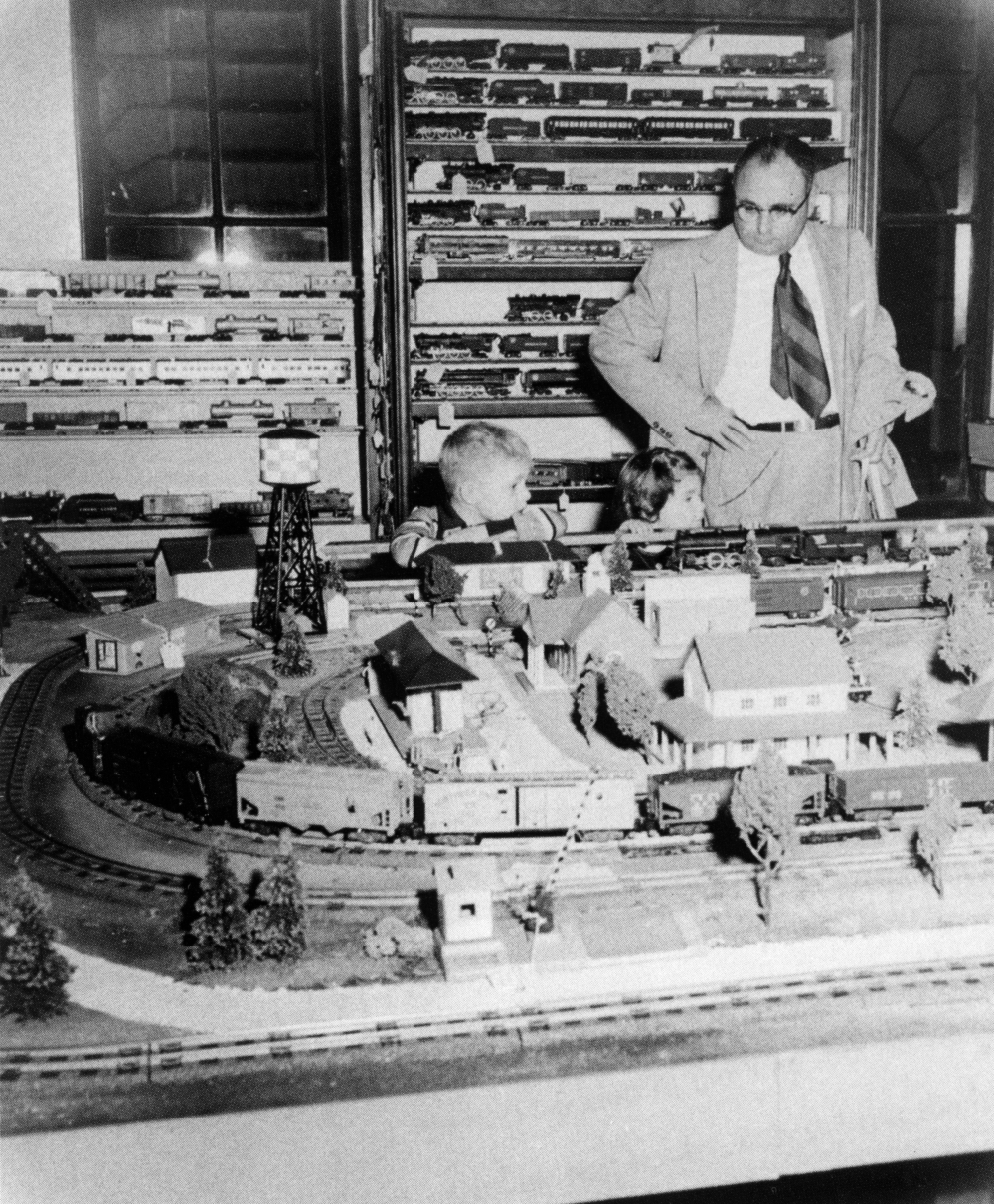 Another photo of the 1953 F.A.O. Schwarz Layout.
As can be seen from the display case on the left, F.A.O. Schwarz also carried Lionel Trains.
The young man in both photos is Mike Novak.

Many thanks to Emil Suda for helping track down information on Billi Bowen and to Kalmbach Publishing for permission to use the photos from Toy Train Memories by John Grams.