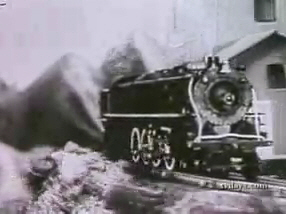 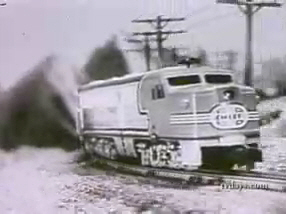 One curious type of layout, about which very little has been written, has always fascinated me. These are the rotating layouts I have seen used in advertising footage, presumably for TV spots.  They are usually rotating in the opposite direction of the movement of the train, making the train stand still in the view of the camera, with the scenery rotating past.  I purchased a video of old toy train ads and much of the footage is devoted to these layouts. They consist of only a simple circle of track with scenery.  Sometimes other non rotating background scenery is also shown.  Assuming that stock track is used, I would estimate that they are approximately 44-46 inches wide, since there is some scenery on the outside of the circle of track.  They look as if they could be constructed with a disc placed on a sideways mounted bicycle wheel. My first thought was that they were motorized, considering the close synchronization of the rotation speed and train speed shown in videos.  They actually work on a much simpler principle, that of gravity.  The disk on which the track sits is elevated slightly at one end creating a low spot in the rotation.  That low spot is sought out by the running train and the force of the motor in the locomotive moves the circle of track in the opposite direction to the train movement.  The locomotive and cars are stationary as it is unable to get itself out of the low spot.  All that would be required to allow the train to surge ahead is to slow or stop the rotation of the wheel and this appears to be demonstrated in the video link.

With the exception of about a minute or so of log loader action, this 9 minute video of Gilbert advertising outtakes is devoted completely to rotating layouts.  It shows several versions in action.  The website that originally featured it, tvdays.com  says it is from 1954 and that seems to be logical considering the knuckle coupler rolling stock shown and the "Chief" lettering on the Santa Fe diesel.

In a copy of the Train Collector's Quarterly, 1 I found a reference to a Popular Science article 2 which explained how to build such a display.  The article showed an HO version featuring an American Flyer HO Frontiersman set, but the principle is the same regardless of scale.

You can read the Popular Science article online at the above link.  Don't use the scroll bar as it will probably cause you to scroll far past the next pages of the article.  Mouse over the illustration and the cursor will be a hand.  Left click while the mouse is over the illustration and it will grab the page and allow you to slowly pull the other pages of the article into your view on the screen.

I also learned that this type of display was not unique to American Flyer.  Lionel marketed a version of such a rotating layout to dealers in 1951 under the "D52" catalog number. 3