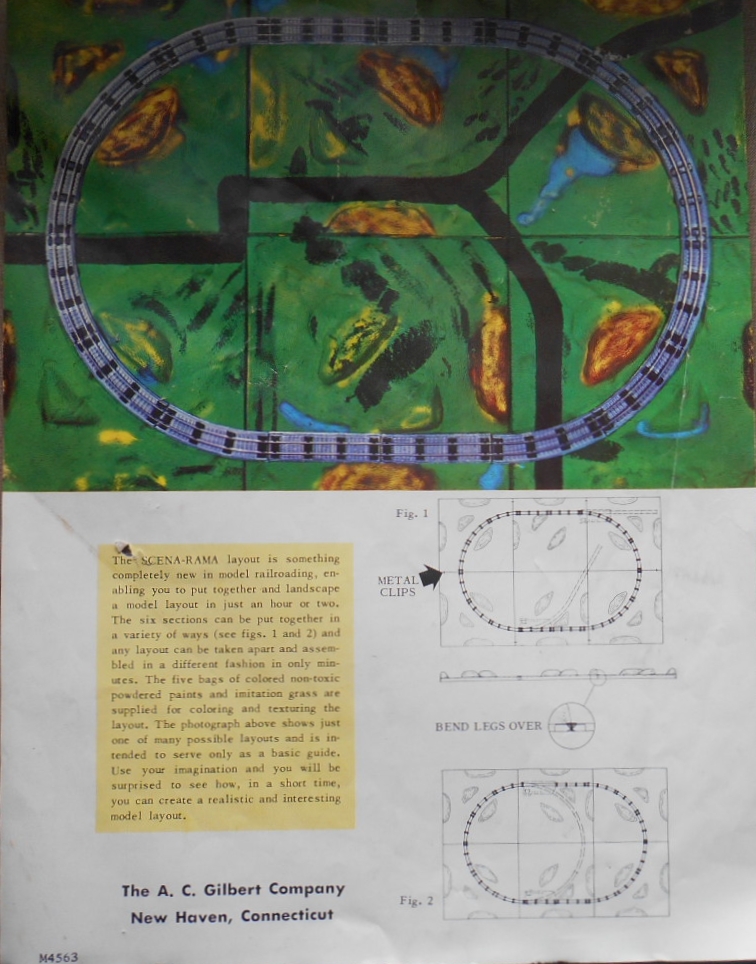 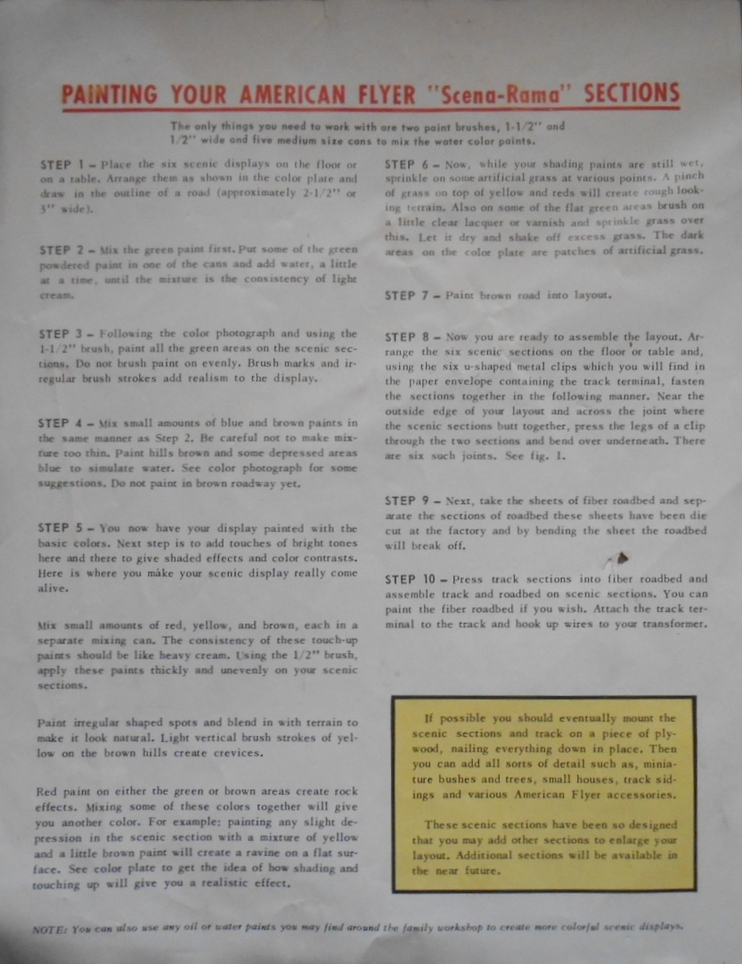 Above you will find several illustrations of the Scena-Rama or Scenic-Rama system developed in 1959.   At the very top is a copy of the instructions provided for painting the panels.  Below that are photos of the top and bottom view of a very nice example of unpainted panels.  While all the panels were identical in form they could be painted in various ways to add features such as roads and varied treatments of the molded scenery of the panels.  Below that are the paints and grass that came with the 20048 train set marketed in 1959.  Finally there are photos of the overall view of the 20048 set and a panel with track installed.   These same scenic panels were marketed to dealers as the 28143 Scenic Action Display.  A simple circular version consisting of only 4 panels (28139) was also marketed to dealers in 1959.  Whether the idea was primarily aimed at dealers or the general public, it was short lived.  David Dewey who owns a 20048 set thinks it was a test marketing since it was only made available in that one department store special set.  If it was a test marketing, it wasn't a very vigorous one.  This set didn't go all the way to instant gratification, though, as it still required the use of imagination to paint the scenic panels.  That was pretty much in line with the general Gilbert philosophy that toys should be designed to promote creativity.  Still, because of its construction, it didn't encourage the purchase of accessories, which had also been a part of the Gilbert philosophy.

They say "a picture is worth a thousand words."   If you ever wondered what those thousand words would look like, all you have to do is read a patent application description of an invention.  The patent credits this invention not to Russell Smith and/or Gabe Monaco, the usual Gilbert inventors, but rather to Guy Schumacher, a Gilbert Executive and former plant superintendent.

After reviewing Patent 3,025,626 covering the Scena-rama system, I think that Guy Schumacher had an excellent idea, but it was not fully developed and had several issues.

Durability of the Construction Material

First of all, the patent set out the construction material as "a plastic or fibrous material such a papier-mâché deposited upon or formed between molding patterns."  It notes that the surface would be molded with upraised hills and depressions.   The depressions in addition to preventing the surface of the panel from looking unnaturally flat, also served as a multitude of feet to support the raised surface of the panel.  The hills were supposed to be placed irregularly in relation to the center of the panel so that the panels would not produce symmetrical features when placed together.  Also some of the hills were to mate with their other halves on adjacent panels, producing hills that extended from one panel to the next.  Finally, there were multiple flat areas for the placement of track.  Apparently the chosen material for construction was papier-mâché, which caused the end product to resemble the material used in egg cartons.   I don't really think these panels were intended to be assembled and disassembled, as this papier-mâché construction was not durable enough for this.

The patent application also notes that the optimal sizing of the panels would be to equal to a multiple of the sizes of straight track available.  This would allow the track section ends to match the panel ends.  Using the example of a 24 inch square panel, it notes that such a size would accommodate 6, 8, or 12 inch track sections, none of which were available from Gilbert.  If 2-10 inch sections were used, the curved track from the end panels would have to be brought in 2 inches on each side.   Whether or not this would allow proper placement of the track on the curve right of way on the panels is questionable unless excess space is included in the right of way to allow this.  Note that the photo of the 28143 dealer display above shows two straight sections with the curves encroaching on the center panel.

Could they have solved this problem by changing the panel sizes?  While any radius can be fitted on a corner panel with the rail ends abutting the edges, the panel size must be at least a little larger than the radius of the curves.  With 20 inch radius curves, the very minimum size they could have used would have been 22-23 inches and that would still be too long for 2-10 inch straight sections of track.  They could have made 30 inch side panels for the straight sections, but the panels in this system were designed so that any panel could accommodate either straight or curved track.  Unless they were willing to create new track sections for this system, the straight sections would not fill the total length of a panel.  As it was, the design as manufactured required the track placement to be a separate operation from panel assembly.  It is interesting to note that the illustrations of possible layout configurations shown in the patent application show two straight sections reaching from edge to edge of the presumably 24 inch panels.  In the illustration of the figure 8, 45 degree curved sections are employed with two sections to a 90 degree curve, rather than the normal 3 - 30 degree sections.

Another problem facing Gilbert with these panels was that they appear to be seeking to emulate wide open country, a very non symmetrical setting, yet they needed the panels to have enough symmetry to be placed together with potential roadways and track ways matching from panel to panel.

The Patent and All Aboard Sets

The interesting thing about this patent is that it is a very generic patent and covers many different possible implementations, including the All Aboard Sets.   While there is another patent for the All Aboard system that covers the improvements made to cure many of the issues discussed above, the manufacture of the All Aboard sets was done under this earlier patent, which is clearly stamped on the bottom of each All Aboard panel.

Special Thanks to Bill Sheneman and David Dewey for their assistance in preparing this section.