Death of the Salesmen 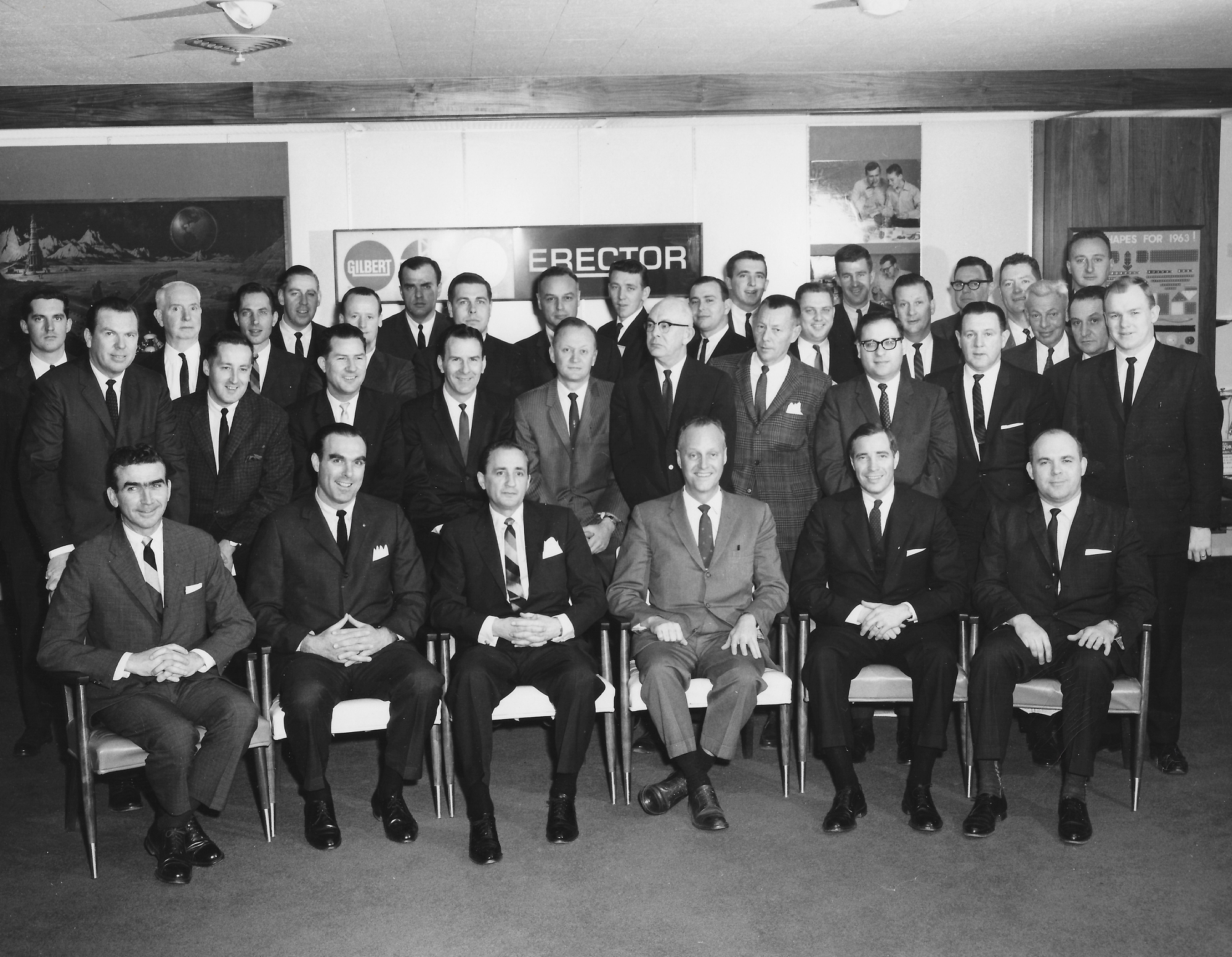 (as shown on reverse of photo)

This photo, taken in 1963, is probably the last time the salesmen in this photo ever met together as they were replaced with independent contractor "Manufacturers Representatives" in 1964.

A.C. Gilbert Sr. had died in 1961 and was succeeded as chairman of the board by A.C. Gilbert, Jr. In 1962, the Gilbert family made a decision to sell their shares in the company to the Wrather Corporation, headed up by Jack Wrather.  Though his wealth came from the petroleum industry, Wrather was best known as a television producer whose credits included the Lone Ranger and Lassie. He was not familiar with the toy business and when he took over Gilbert, he turned to people he trusted for advice.

This was a time of great change in the toy industry. It was an era of expensive television advertising which also saw the rise of discount merchandising. In an effort to keep up, Gilbert branched out into areas of the toy industry in which they had no prior experience, such as toys for girls and pre-schoolers. Television enabled the rise of fad toys that might be tossed out once a new fad came in. Gilbert did not do well in this new toy marketplace and the period from 1962 was one of continuous losses. The losses in 1963 were so devastating that Gilbert took the radical step of contracting out all their sales work to independent contractors. This system was unpopular with dealers, who appreciated the fact that Gilbert salesmen were always ready to help with any problems on their orders. The "Manufacturer Representatives," who represented several non-competing toy lines were more interested in making the deal than servicing the dealer if problems arose. This step was one of several crucial mistakes that led to the demise of the company in 1967.

Notes on the Individuals

William Quinlan is pictured to the left of A.C. Gilbert Jr. and Ben Moats is seated on the right.  They were two executives brought in by Wrather Corporation.   Quinlan, who had been a vice president at the Wrather Corporation, was a personal friend of Jack Wrather and had been brought in as President of the Gilbert Company after the Wrather stock purchase.  He had no toy experience but replaced Harvey Roth who had significant toy sales experience.   Quinlan brought with him Ben Moats, formerly of Scott Paper Company, also without toy experience, to be Vice President of Merchandising.  Moats in turn brought in Ron Richards (1st row second from left) from Union Carbide, not a place where one would gain toy sales experience, as Sales Manager.  Richards brought in several junior salesmen who had worked with him previously.

Their time at Gilbert didn't last long as Quinlan and Moats resigned effective January 1, 1964 in the wake of Gilbert's disastrous year in 1963, as reported in the New York Times on December 19, 1963.  Losses at the company were cited as the impetus for the departures.

Roy McGrail (2nd row second from the left) was mentioned in a AF Collectors column in the September/October 2002 S Gaugian.  A reader reported on the acquisition of papers from Mr. McGrail's estate, concluding that his sales area included New England.  Among those papers were instruction sheets for the Sales Department and minutes from Sales Department strategy meetings from 1947 and 1948.  Mr. McGrail was obviously a long time Gilbert employee.   While the nature of the papers is not specifically stated, they apparently involved fixing problems that arose in those years.   Could they be referring to the loose driver rim problem caused by shrinking plastic whitewalls?  In any case, this is an indication of the old Gilbert sales approach that involved the sales staff in solving problems that arose and standing in full support of their products.

There is an excellent article about these three men who handled Gilbert Sales in the western states from their postings on the west coast.  The article, "Bringing American Flyer to the West," by Roger Carp is found in the September 1995 issue of Classic Toy Trains magazine.  In the photo above, Al Ormsbee and Bob Schanzer are on either side of Maury Romer, Schanzer on the left and Ormsbee on the right.

Al Ormsbee handled the western territory from 1946 to 1959, at which time he transferred to Florida to handle the southeastern states.  When this picture was taken that was where he was assigned.  Schanzer replaced him in California.  Both he and Schanzer left the company in 1964, no doubt when Gilbert replaced their sales staff with independent contractors.

Ray Losi, who is discussed in the section on Bill Stulla's Cartoon Express Show, is not in this picture as he left the company in 1963, most likely before the date of this meeting.

Robert Hartley, a professor of business administration devotes a chapter on Gilbert's demise in his textbook, "Marketing Mistakes" which was reprinted in the September/October 1978 issue of S Gaugian Magazine.