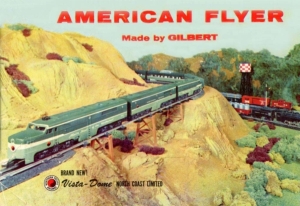 At least 3 theories have been suggested to explain where this catalog cover photo was taken.  The first two are very unlikely and the third is probably correct, but there is no link between this photo and any other photo that could clearly establish even the most likely theory.

One other reason I think this is probably not the explanation is that Ray Mohrlang, who has more photos of that layout than anyone I know, thinks that Theory 3 is correct.

Theory 2 - A layout at the B&O Railroad Museum

This theory was stated very clearly as fact in an article by Thad Lasky in The Collector, the publication of the former American Flyer Collectors Club. 1  The text of the article asserts that the photo was actually taken on a mid 1950's display layout at the Baltimore and Ohio Railroad Museum.  The article further states that the cover photo was produced from a colorized version of a black and white photo taken on this layout.  This was supposedly the first time a catalog ever featured a non-Gilbert layout.

The article asserted as authority an article in Railroad Model Craftsman in the January 1957 issue. 2  When I read the RMC article, which appeared in the "Toy Trains" section of that magazine (available in digital archive from HSL, (Hybrid Systems Limited), it turned out to be an article on how to do scenery.  The cover photo was included and all photos were said to be "B&ORR Photos."   All the photos other than a black and white version of the 1956 cover appear to have been taken on an obviously scale, probably HO layout.  There was nothing there to visually connect the catalog photo with a larger layout, B&O or otherwise, or with the other photos.

A further review of the publication Scale Modeling at the Baltimore and Ohio Railroad, 3 which describes the model railroad activities at the B & O, revealed nothing to indicate that this might have been a shot on one of their traveling layouts or any of their other layouts for that matter.

As to the catalog photo being colorized, if it were, it would be a pretty good colorization, especially for 1956.  The photo, of course, appeared in RMC in black and white, but RMC at that time was printed on newsprint and had no color except limited color on the cover.  I think it is more likely that the original photo was in color and simply printed in black and white because of the limitations of the publication at that time.  The reason the photo appeared was most likely to illustrate the use of lichen for shrubs.  Clearly the supposed evidence presented in the article does not hold up to further scrutiny.

This theory also raises the question of why the B&O would let Flyer promote another railroad using their layout?  You would think they would want at least a minor plug for the B&O, but there isn't even a B&O Timesaver box car among the cars shown on the lower level of the layout at the right.  The 980 Timesaver box car, and the  North Coast Limited, were both new items for 1956.

Theory 3 - A diorama especially constructed for this purpose

This theory was suggested to me by Emil Suda and Ray Mohrlang, both respected Gilbert Historians.   The fact that this photo bears a resemblance, in a toy train sort of way, to the real Homestake Pass (See photo at this link), where the real North Coast Limited ran, also suggests that it might have been constructed to showcase the Flyer version of this crack passenger train, perhaps with support from the Northern Pacific.   Other than this, though, I have no further evidence why this theory might be the correct, but it appears to be the only one which could possibly be correct.  One question remains though.  Why would Gilbert build a separate diorama after just spending $50,000 in 1954 dollars to build the huge 1st floor layout, the price of which upset some stockholders?   Couldn't they have easily found a spot on one of their layouts to photograph the North Coast Limited?  I hope to find some further evidence that clearly establishes this as the correct theory. 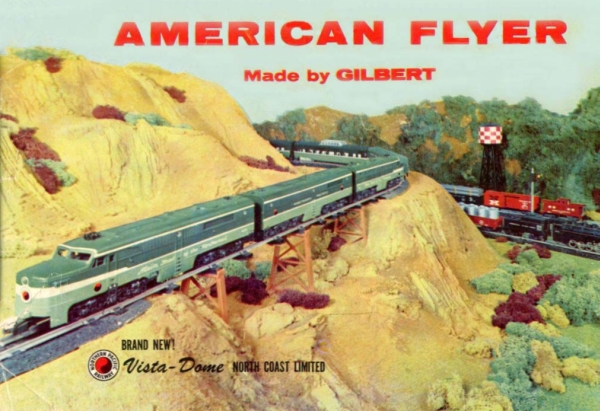